I received the above television from a customer who wanted it repaired.

First with the customer present I connected the TV to the power outlet and noted the TV was as dead as dodo.

From my experience totally dead equipment without any sign of life are caused by power supply failure and usually repair is straight forward considering that power supply section has very few components and testing one by one is not a hustle.

I opened the television and I went straight to the power supply section and started scanning with my two free test equipment called eyes.

Since the television was totally dead, I started with the safely components and looking at the main fuse I noted it was darkened inside.

A darkened fuse means the fuse died under heavy stress and therefore never replace a darkened fuse and apply power since it will surely blow again.

Therefore, whenever you see a darkened fuse expect heavy short ahead and main culprit are components which have one leg on the live line and ground.

So I pulled my meter in continuity mode and tested across the switching transistor (S.O.T) between the middle leg(collector) and the emitter and got a beep either way.

This confirmed the transistor was dead short, I continued checking and found the surge limiter resistor was also open.

Next I checked the S.O.T driver transistor 2SC3807 and found it shorted base – emitter junction.

Kindly note that whenever you find the switching transistor shorted (S.O.T) it is almost certain this drive transistor also has suffered a lot of stress and should be replaced otherwise chances of call back are high.

After replacing the four components now it is time to test the progress so far and therefore I connected the television to the power source via series lamp current limiter.

You can easily make one using the circuit here.

After applying the power, I noted the bulb was bright then dim and this confirmed to me no more shorted component on the supply.

Before connected the power directly without the current limiter I decided to do a postmortem of what exactly was the cause of this short as there was no power surge in the area and the customer confirmed that the kids were watching the TV when it went down.

So I decided to test health of all main filter capacitors using my ESR meter and I bumped on one capacitor on the B+ line rated 4.7 uF/160 V which has an ESR reading of 0.15K (150 ohms)

Usually when a capacitor ESR has gone up the voltage on that line drops and since the B+ line is highly monitored, means the feedback circuit kicks in and advice the primary source to increase the voltage (drive fast) and this caused the S.O.T transistor to overdrive and hence short causing a series of other damages to the primary side of the power supply.

So in case I failed to do further investigation and found the root cause of this problem then it means it would just a matter of time before the television goes down again.

So back again to troubleshooting this time the audio circuit and this tv was using ic AN7522N.

Searched its datasheet from the net and this what I got. Confirmed VCC pin is pin1.

I did live testing and I got zero voltage on pin1, I checked backward looking for what could be blocking this voltage and found resistor (R465) open.

I checked if the I.C was shorted by testing between pin 1 and ground and was found to be okay.

I replaced the open resistor which I picked from a junk board and applied power and noted the voltage 12 volts to the audio circuit is stable, this confirmed there is no short on that line and finally I re-assembled everything and after applying the power I noticed the audio was now back.

Later the customer came to collect the television and confirmed to me that audio was also a problem but had connected the TV via woofer to solve the audio issue and now was very happy to hear the audio is back.

Humphrey Kimathi is from Nairobi Kenya and the author of

Please give a support by clicking on the social buttons below. Your feedback on the post is welcome. Please leave it in the comments. If you have electronic repair articles to share with us, please contact us HERE.

P.S-  If you enjoyed reading the above article, click here to subscribe to my blog (free subscription). That way, you’ll never miss a post. You can also forward this website link to your friends and colleagues-thanks!

Note: You may check out his previous post in the below links: 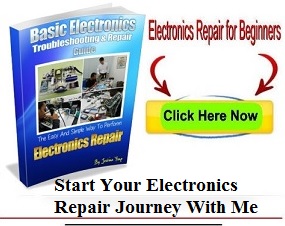