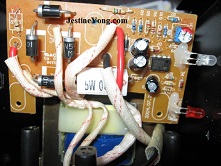 After opening I saw immediately why this Charger did not work. A 5W 0.05 Ohm resistor was defect. The simple circuit had a signaling circuit for the front leds with a single 8 pins LM358, 4 Power Diodes that deliver the Charging current for the Battery. With the now bad series resistor to protect the Transformer from Over Charging with too large currents. Probably because the owner replaced his Car type Fuse on the Front of this Charger with the wrong value, this resistor was now an open circuit.

I phoned my Electronics Shop in my Hometown’s Centre if they had this bigger resistor in their shop. To be sure I didn’t went there all the way for nothing , I always phone up first because most of the time I had to pre-order a component to get it weeks later. And because it was a device from someone else, I didn’t want to wait three weeks or more on a simple component.

After the bad 0.05 Ohm Resistor was replaced by our self-made replacement as previous photo shows, the Charger worked as was expected. If this self constructed resistor with its 0.055 value now is a bit higher. 5 times 1/1000 of an Ohm to be exact more than the originally replaced resistor it could mean this less Current.

By just calculating we can be sure to rule out any unwanted effects that we would not have anticipated. (Worst Case scenarios). Hope this was nevertheless an entertaining and not to complicated article.

P.S-  If you enjoyed reading this, click here to subscribe to my blog (free subscription). That way, you’ll never miss a post. You can also forward this website link to your friends and colleagues-thanks!

You may also check his previous article in the below link: 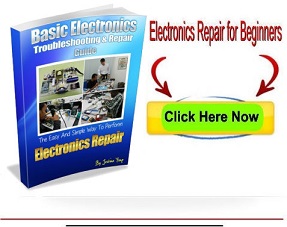